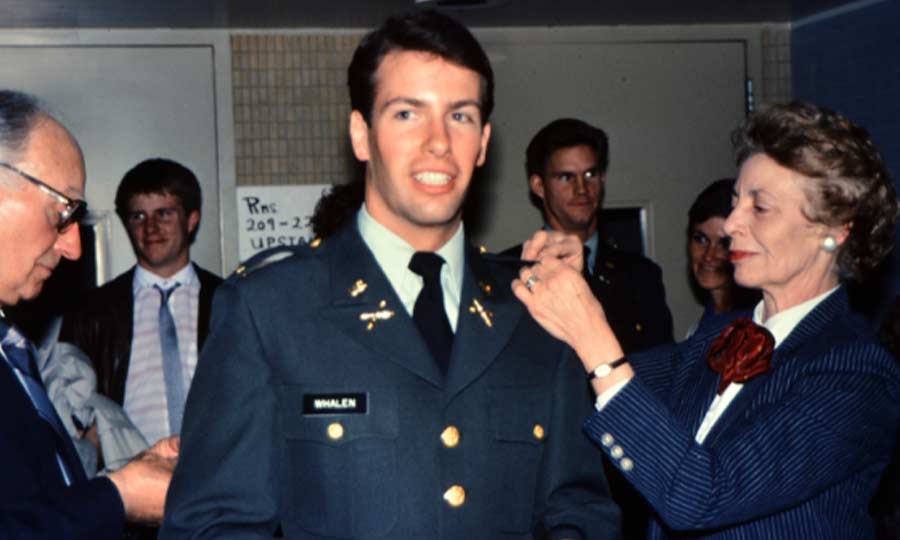 Why my Army service is important experience on the County Council

The value of military service isn’t an understandable experience – unless you’ve been there yourself. During my time in the Army, I learned the value of training and teamwork as a young second lieutenant. And, like so many servicemembers, I learned that good leadership understands that respect is earned, not demanded.

I’m honored to be supported by military veterans and leaders, like:

I’m proud of my military roots. My immigrant grandfather served in the U.S. Army overseas during World War I after training at then-Camp Lewis in 1917. My father served as a Naval officer during World War II and the Korean War. Growing up, my father’s medical profession and career with the Veterans Administration took our family to four  different states. Like so many children in military families, I learned lessons of resilience from a young age.

I followed my family’s legacy of military service and – through hard work – earned a commission through Gonzaga University’s ROTC program after graduating as a Distinguished Military Graduate. From 1985 through 1992, I served in the U.S. Army as a field artillery officer—in both the active and reserve components—obtaining the rank of captain.  I received my field artillery training at Fort Sill, OK, and later attended Airborne School at Fort Benning, GA.  I was then stationed in Bamberg, Germany where I served with a nuclear capable field artillery battalion during the years prior to the fall of the Berlin Wall.

The value of military service isn’t an understandable experience – unless you’ve been there yourself. During my time in the Army, I learned the value of training and teamwork as a young second lieutenant. And, like so many servicemembers, I learned that good leadership understands that respect is earned, not demanded.

As a member of the Pierce County Council, it would be an honor to fight for the interests of the Mighty 6th District, which includes the Joint Base Lewis-McChord community – and I won’t take their support for granted. I will fight hard to earn and keep the respect of the men and women of JBLM by producing results.

As a member of the Lakewood City Council, along with our legislative delegation,  I worked to obtain needed transportation funding for roads, including the I-5/JBLM improvements, to alleviate congestion at the JBLM entrances.  I worked to help obtain federal funding for on base schools at JBLM, to better serve the education needs of JBLM families. We have also worked hard to address the needs of our veterans.

Lakewood was pleased to partner with Pierce County to bring the Cohen’s Veterans Network to our community, providing essential mental health services to veterans, regardless of their ability to pay. In Lakewood, we started a unique Municipal Court Veterans Program, recognizing that returning veterans face unique problems related to their service. This unique approach both holds veterans accountable for their behavior while referring to and monitoring treatment, interventions and support through a team-based approach with judicial monitoring.

As part of the Economic Development Board, I worked to ensure that our work plan included a focus on our strong military community. Pierce County and JBLM exist in an historic and symbiotic relationship. Camp Lewis was formed in 1917 when residents of Pierce County donated over 68,000 acres of prairie land to the federal government. Now, JBLM’s economic impact to our region is over $9 billion annually.  The economic vitality and sustainability of JBLM depends not only on the active duty servicemembers, military family members, veterans, and the businesses that serve them, but also on strong community leadership that understands the continuing importance of JBLM to Pierce County.

I’m committed to providing more economic and housing opportunities to our military members. As a member of the Pierce County Council, I will fight for more training and vocational support for servicemembers transitioning to civilian careers. With living costs increasing, I’ll also work to create a more affordable housing options for military and civilian families alike by pushing for policies that encourage responsible development.

I believe active duty servicemembers and veterans share a common bond to protect and preserve our nation and the ideals for which she stands. While there’s a lot of division in politics on the national level, I believe we can and must do better at the local level. The military taught me the importance of not only working hard but also, working together in order to accomplish the mission. Voters can count on me to do both as a member of the Pierce County Council.